We're finished brewing, and I put my starter away. And that's that. Today was a nice, relaxing day before Thanksgiving.

We're brewing the maple porter beer this evening. We have about 20 minutes left in the boil stage. Then we'll chill the wort, move the wort to the fermenter, pitch the yeast, and cap fermenter with an airlock. We probably have 40 minutes left in the process. We should be done brewing and cleaning by 11:00 p.m.

This evening while brewing, we drank our last Spencer Abbey Trappist clone beer that we brewed back in August. I did not realize that we still had one left, so this was a pleasant surprise. It's one of my favorite beers that we have brewed. This one tasted good too. It has a nice after taste, making me look forward to the next drink.

We have not started brewing beer yet today. Probably soon. DD shopped some this afternoon, and currently, she's working on other food-related projects.

Came inside a few minutes ago after spending a little over two hours doing yard work in our backyard. I cut down our Oak Openings Region native plant stalks, raked leaves, and swept our driveway.

I made only two tarp runs to the curb, hauling leaves. I'm done with the tarp hauling for this season. Any leaves that I rake up now, I'll pile them into my small, plastic, four-wheel cart and haul them to the curb, or I'll dump them at the very back end of our yard.

The city will make its second pass on leaf pickup soon. I'm nearly done tidying up our yard. A lot of twigs came down on Monday with the big wind. I need to spend one to two more hours picking up twigs and raking small patches of leaf piles, but this doesn't have to be completed before the city comes by and picks up the leaves at the curb.

I jammed some plant stalks into a plastic trash can and moved the trash can into the garage. The tall coreopsis and sawtooth sunflower stalks are kind of woody, so I thought that the stalks would make good kindling for starting a fire in our small fire cage. This evening would be a nice night for a backyard fire.

Today's weather was comfy for yard work. It was overcast, so no sun beating down. A nearly calm wind. Temps around 32 degrees, which was perfect when moving a lot. And it was dry.

This Sunday, the 7-4 Browns play at the 6-5 Bills. Buffalo has the best record of any non-divisional opponent that the Browns have faced thus far.

The Browns have played a bit rugged against average to below average teams, such as the Titans, Jags, Bucs, Raiders, Texans, and Falcons. At least the Browns went 4-2 vs those teams. And to the Browns credit, those losing teams made mistakes, and Cleveland took advantage. An opponent has to finish off the Browns when given a chance.

On the flip side, Cleveland has played well against teams with good records, such as the Ravens, Steelers, and Bengals, which are all divisional teams.

The Browns remaining schedule is tough. If the Browns win three of these games, that will be a fine accomplishment. At 10 wins, that will probably put them into the playoffs. A 9-7 record will have the Browns in the playoff conversation, but tie-breakers will need to fall Cleveland's way.

DD's parents stopped by for lunch. Now, I'll feed my sourdough bread starter. Then I'll do some more yard work, since today's weather is dry with only a light wind.

We plan to brew a two-gallon batch of beer this afternoon. This will be our first brew day in two months. Too long between batches.

Today, we'll brew a maple porter. On Friday, we might brew a two-gallon batch of an apple ale beer.

The following weekend, we plan to attend a group brew day. We'll brew a five-gallon batch, but at this point, we have not decided on a beer.

one concern is the potential for a little reverse lake effect to develop off of the lake this afternoon. low level flow is expected to become more aligned during the afternoon out of the northeast and this could send a few light lake effect shsn or sprinkles into the central and western lakeshore counties. accumulation from this is not expected due to little or no measurable precip and temps a little above freezing.

I'll have to check to the Hi-Def radar this afternoon to see if anything materializes.

A person came out this morning to measure our kitchen and our steps to the basement. We plan to have new flooring installed.

Sunday’s game against the Patriots included a pair of incidents involving Lions center Dominic Raiola. He leveled Patriots defensive tackle Zach Moore with a blow to the head during a play, and then Raiola took out Moore’s knees on the final snap of the game, because Raiola was unhappy about New England’s decision to score a garbage-time touchdown.

Raiola said on Tuesday that he wasn’t fined. Per a league source, he won’t be.

I highlighted the word "incidents" because they were goon, cheap shots.

The NFL will fine a player for throwing a football into the crowd, but when a player intentionally tries to hurt another player, that gets ignored. No fine. No suspension.

More from the PFT story:

It’s unclear why the league has opted to look the other way in both instances, especially in light of the safety-conscious nature of today’s NFL. And in light of the league’s fine-happy nature on issues that have little to do with safety. Or, as some would argue, common sense.

Raiola punched Moore in the head and then dove at Moore’s knees on a play when the Lions were taking a knee. If failing to talk to the media or wearing the wrong kind of headphones or selecting shoes that don’t reflect the proper color scheme justify the withholding of a portion of a player’s paycheck, how do neither of Raiola’s infractions trigger punishment?

Today: A slight chance of rain and snow showers after 2pm. Cloudy, with a high near 35. Northeast wind 5 to 7 mph. Chance of precipitation is 20%.

Tonight: Mostly cloudy, with a low around 25. Northwest wind around 6 mph.

Thanksgiving Day: A chance of snow showers, mainly after 8am. Mostly cloudy, with a high near 36. West wind 7 to 9 mph. Chance of precipitation is 30%. New snow accumulation of less than a half inch possible.

Thursday Night: Mostly cloudy, with a low around 20. West wind 7 to 9 mph.

Friday: A slight chance of snow showers after noon. Mostly cloudy, with a high near 33. Southwest wind 5 to 9 mph. Chance of precipitation is 20%.

Friday Night: A slight chance of snow showers. Mostly cloudy, with a low around 29. Chance of precipitation is 20%.

Saturday: Mostly cloudy, with a high near 46.

Saturday Night: A chance of showers. Cloudy, with a low around 44. Chance of precipitation is 30%.

Sunday: A chance of showers. Mostly cloudy, with a high near 53. Chance of precipitation is 30%.

Sunday Night: A chance of rain and snow showers. Mostly cloudy, with a low around 31. Chance of precipitation is 30%.

Monday: Partly sunny, with a high near 37.

Monday Night: Partly cloudy, with a low around 26.

Tuesday: Partly sunny, with a high near 44.

About 50 people rallied in front of the Lucas County Courthouse on Tuesday afternoon to protest after Monday’s announcement that a grand jury did not indict the Ferguson, Mo., police officer who shot a teenager in August. 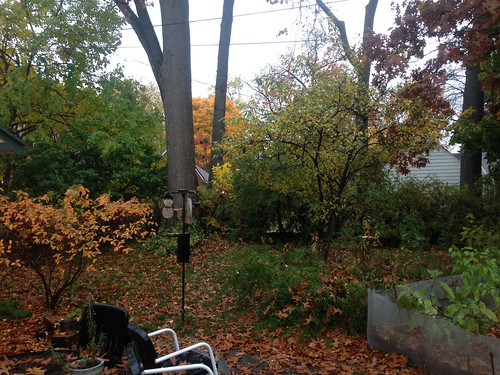 Making this initial post from my iPhone, using the enhanced writing function in single-screen mode within Junco / JotHut.

This is why I prefer to use a web app with a database, so that I can publish easily and instantly from any web-enabled device. I can do that three ways with both my Junco and Grebe web publishing apps: