Our first snowfall may occur this weekend

Based upon the Wed evening, Oct 29, 2014 forecast by the National Weather Service, Toledo may receive its first snowflakes and its first measurable snowfall of the season on Sat morning, Nov 1.

Oct 31, 2014 morning update: We may receive up to a half-inch of wet snow on grassy areas by sunrise Nov 1.

As of Oct 29, we have yet to experience a frost around our West Toledo home. On Wed evening, Oct 29, I harvested sorel, a few green tomatoes, and a small pepper from our backyard garden. The sorel keeps producing.

Two new blooms currently exist on our backyard Nasturtium plant. A rogue plant has produced new light yellow flowers in the past week.

On at least three occasions in October, Toledo Express Airport has recorded low temps at or below freezing, so I'm guessing the outlying areas and maybe more open areas within the city have experienced frost.

Our property is surrounded by a lot of oak trees. Very shady. And those oaks may act like a large car port and protect the property from frost on borderline mornings. But our lack of frost is mainly due to the city being a bit warmer.

The trees are dropping their leaves a little earlier than normal this year, so our cover is disappearing fast.

The Wed evening, Oct 29 garden harvest was probably my last for 2014. Not much is left growing, and the forecast temps for Thursday morning and through this weekend indicate that a hard frost and/or freeze will occur on more than one morning.

The following content was based upon weather info from Wed evening, Oct 29, 2014.

I believe that a snowfall of either 1/8" or 1/4" is required to be considered "measurable."

According to the National Weather Service, it appears that our weather will deteriorate late Friday night or early Saturday. We might receive our first measurable snowfall of the season by sunrise Saturday, although it's still uncertain as to how warm or cold it will be. If it snows, it might be a dusting that only covers the grassy areas, leaving roadways wet.

Fri evening, Oct 31 is trick-or-treat in Toledo. Plus, high school football games will be played. The football schedule is one reason why many communities moved their trick-or-treat to another night.

The forecast models at the above link predict Toledo's temps to range between 34 and 40 degrees by sunrise Saturday. The NWS predicts colder temps.

But right now, all models agree that the low temp on Sunday morning will be in the mid 20s, our coldest morning of the season.

Friday: Showers. High near 46. Light and variable wind becoming north 5 to 9 mph in the afternoon. Chance of precipitation is 80%. New precipitation amounts between a tenth and quarter of an inch possible.

Friday Night: Rain and snow showers likely before midnight, then a chance of snow showers. Cloudy, with a low around 31. Blustery, with a north wind around 21 mph. Chance of precipitation is 60%. New precipitation amounts between a tenth and quarter of an inch possible.

the big question is the precipitation type for friday night and saturday and how much qpf will fall.

the models are flip flopping every model run. the gfs/sref is the warmest and says mainly rain while the ecmwf/nam is the coolest. the canadian model is in between on how quickly it cools to get to snow. used a compromise until it is clear which model is correct.

as the upper low moves from michigan to the carolinas warmer air will try to move in from the east especially for ne oh and nw pa.

went with a mix early friday night over nw oh and then all snow late.

will have to monitor the snowfall amounts as we get closer to the event.

(i need the urban dictionary definition)

Forecast for the rest of the weekend:

Saturday: A chance of snow showers before noon. Mostly cloudy, with a high near 41. Chance of precipitation is 30%.

Saturday Night: Partly cloudy, with a low around 25.

At 11:00 a.m., Toledo area temps were about the same everywhere (43-44 degrees), so mid to upper 30s during trick-or-treat time is probable within the city too.

The Wundermap will show weather info, reported by personal weather stations in the Toledo area or your browser's default location. 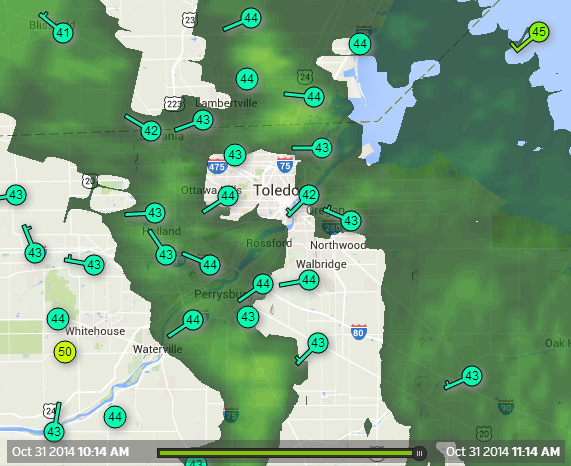 Today: Showers. High near 44. Northwest wind 8 to 11 mph. Chance of precipitation is 90%. New precipitation amounts between a tenth and quarter of an inch possible.

Tonight: Rain and snow showers likely before 1am, then a chance of snow showers. Cloudy, with a low around 31. Blustery, with a north wind 22 to 25 mph, with gusts as high as 38 mph. Chance of precipitation is 60%. New snow accumulation of less than a half inch possible.

don't expect to see any snow start to mix in over the far nw until after 6 pm.

still expect precip to taper down as the precip starts to change from rain to snow so snow accumulations should stay light with mainly wet accumulations mostly on grassy areas.

air cold enough to push temps below freezing will only be moving in tonight in the west and maybe just the last hour or so of the night so not expecting much of a freezing issue for paved surfaces.

Temps were in the mid to upper 30s early Friday evening.

Toledo Express Airport reported snow falling during much of Fri evening, Oct 31. I only saw rain in the city on Friday evening, while driving to and from Mutz.

The http://wunderground.com/wundermap radar image showed a doughnut effect. The hole was rain over Toledo while the dough was the snow around Toledo.